In a press release, 2K has announced that those who pre-order NBA 2K17 will get the original “Dream Team” as a pre-order bonus!

Those not old enough to remember the Dream Team, it’s comprised of all-time greats like Michael Jordan, Magic Johnson, Larry Bird, Karl Malone and uh, Christian Laettner.  This ’92 team is widely considered to be the best team of all time.

Additionally, 2K has announced a partnership with USA Basketball that will bring the entire roster of the 2016 National Basketball team to the game! Not only that, but it even includes Coach K!

2K has also revealed that renowned Duke University and USA Basketball coach, Mike Krzyzewski, will be making his debut in the NBA2K series. Krzyzewski – or “Coach K,” as he’s widely known – will appear on the sidelines coaching the 2016 USA Basketball Men’s National Team in NBA2K17. His likeness will also be found in a revamped tutorial mode focusing on teaching fundamental basketball strategies including pick and roll execution, proper defensive positioning, ball movement, boxing out, court awareness and more. 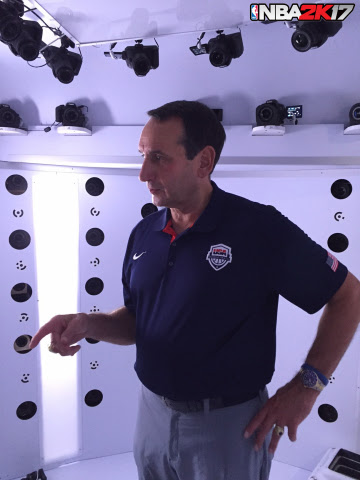 Basketball fans, will finally be able to pit Jordan & Co. will fare against Kevin Durant, Paul George, and the rest of the 2016 USA Basketball squad later this September 20 when NBA 2K17 releases for the PS4, PS3, Xbox One, Xbox 360 and PC.